So, I’ve been using Vista quite happily for a fair while now. All the doomsayers complaining about how it would use so much more resources were wrong – provided your turn off the transparent borders on windows it still runs just the same (it seems to me) as XP. I guess I’ve always said to friends that it’s alright – I wouldn’t pay to upgrade to it (it doesn’t seem to offer much), but if I was buying a new PC, I’d be okay with it. The only problem I had doing just that was with blackhole detection in the new TCP/IP stack, and that was… exotic.

However, I think I’ve just found my first big gripe. Performing standard system maintenance on my desktop, which is used pretty much exclusively as a VM host, I noticed that my primary drive was using 40Gb. That seemed rather high for Vista, Office ’07, SharePoint Designer and Adobe Reader. Naturally, I broke out Treesize:

So, 28% of my drive is being taken up by the winsxs folder. What the hell is that? END_OF_DOCUMENT_TOKEN_TO_BE_REPLACED

The only thing that I really like about Vista (in a ‘I wouldn’t like to go back to not having this’ way) is the search box in the start menu. To be honest, I’ve stopped clicking to start applications entirely – it works that well.

Well, today, I had a surprise. One of my colleagues asked me to test something for him, and update my Group Policy – so I did:

Then he asked me to search for something in the Vista start menu – and look what I found: 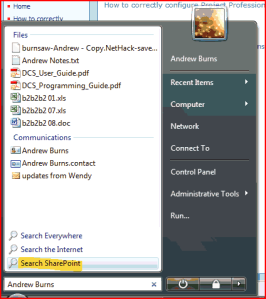 Adding a SharePoint system to the Vista Start menu…