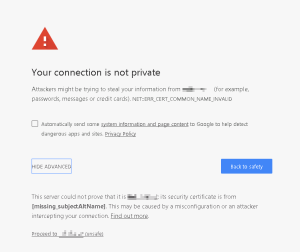 The error message was:

Huh? What broke this?

The SSL cert continued to work without a SAN just fine in IE, but Firefox and Chrome now demand it, and so were throwing SSL errors.

Now, it seems that the Subject Alternative Name is what we’re actually supposed to use, and that publicly trusted certs have used both fields for years – but in our development server, using our own CA, that wasn’t the case.

See How to Request a Certificate With a Custom Subject Alternative Name.

Or Create a self-signed certificate for development.