One of my pet peeves with SharePoint is the People and Groups pages. These are pretty damn complicated.

You typically get groups for:

And often you can have

… and so on. And if individual sites start to break from inheritance and define their own groups, you get even more groups. It’s possible (especially if the administrator of the system doesn’t understand what they’re doing – which is often the case) to end up with 3 times as many groups as sites!

Frankly, this is enough to confuse me, never mind users. Trips into the People and Groups pages often takes me some time to understand what I’m seeing. And the worst part is that often users just want to be able ‘Give Fred access to this site’. They don’t care about other groups or other sites, permissions levels, or any of that jazz.

The case management system we’re working on at the moment has this sort of requirement. Each case is a site, and we want ‘Case Owners‘ to be able to add/remove ‘Case Owners‘ or ‘Case Workers‘. They don’t need access to other groups. They don’t need the ability to send emails, call people, remove users from the site collection, or any of the other (confusing) options on the menus. So, I built my own administration pages… 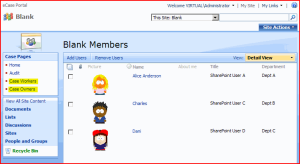 It appears similar, initially – but the navigation on the left is the same as for the rest of our case site. Only the relevant groups (“Case Workers” and “Case Owners“) are linked to on the left, and these links are only shown to users who can edit the groups (Home and Audit aren’t related to people and groups). Also, the menus on this page only let users add or remove users – which is all they should need to do.

Yup – big and confusing, asking what rights to give the users, and so on. But all our ‘Case Owners’ want to do is ‘Add Fred to Case Workers’; knowledge of the individual rights would just confuse. So, I built a simpler ‘Add User’ page:

It just adds users to the appropriate group; you don’t have to worry about sending emails, or assigning individual permissions, and so on. Much tidier.

Obviously, you can still use the SharePoint People and Groups pages, but I think this offers an interesting way of providing a much simpler experience for users. Naturally, you need to consider if such a solution would actually work in your solution, too. And this stuff doesn’t even look at List/Item level permissions. But I hope that stimulates some thoughts…

5 thoughts on “Simplified People and Groups pages in SharePoint”