As mentioned before, I’ve been automating the building and analysis of our SharePoint code, and this led me to ask, can you run SPDisposeCheck as part of a TFS build process?

Yes we can. Richard Fennell has a concise and simple description of how to do it. It’s best to read that, but in case that site goes down, the short of it is – use InvokeProcess to run SPDisposeCheck, and it’ll return a value that is the number of errors/warnings it finds. I find that that’s enough to choose whether to write a warning to the output of the build, and I don’t then parse and write the individual warnings into the build. These should be captured by the build log, and they’re pretty obvious, so it doesn’t seem worth the hassle. You could do it if you really wanted to.

Advertisement
Run SPDisposeCheck as part of your build process

So, we’ve been working on putting our SharePoint solutions through a proper build process in Team Foundation Server 2010 (TFS), and I hit a bit of a snag.

I had been given a build definition that had a build process – a Workflow Foundation workflow – that I wanted to alter. The problem was that while I had the XAML file for that workflow, and the DLL that defined some custom code activities that the process used, I didn’t have a full Visual Studio project for it. No problem, I thought, I’ll just open the XAML up in Visual Studio and edit it. 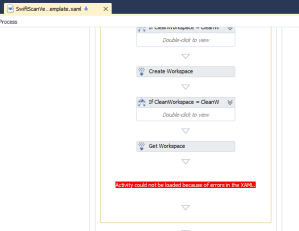 END_OF_DOCUMENT_TOKEN_TO_BE_REPLACED

We’ve started to use SmartAssembly to obfuscate the code for some of the SharePoint products that we’ve been working on, and I’d had a few problems with it. END_OF_DOCUMENT_TOKEN_TO_BE_REPLACED