Each term that is used in a Taxonomy field has it’s label (actually, labels) and other details kind of ‘cached’ in this list, and there is a timer job that will push changes to the terms out into these lists – and therefore to items that refer to the entries in the list.

Thus, the TaxonomyHiddenList is like a list that Managed Metadata fields use similarly to a lookup column. Here’s some more of the details that one shows:

What I needed to do in some Client Side Object Model (CSOM) code I was writing recently was, given a Term‘s details, I needed to query for that term being referred to in a large list (5000+ items). I could have tried something like:

“Fine”, I thought, “But what if the TaxonomyHiddenList itself has more than 5000 items?”. I went and checked it, assuming there’d be an index on the important fields, such as IdForTerm and IdForTermSet. I was wrong: 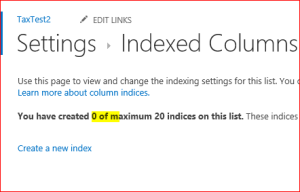 What! No index? So if there are more than 5000 terms used in a Site collection there would be an exception? That can’t be right!

Okay, let’s test it. I put 5001 terms into my TermSet, and created 5001 ListItem‘s that used those terms (1 each), and checked what happened.

Everything still worked. I checked the TaxonomyHiddenList again:

The event receivers that populate the TaxonomyHiddenList (the one that’s added to a list if you add a ‘Managed Metadata’ field to a list) clearly also create the indexes when the 5000 item count is reached.

Okay, so there are indexes (indices?) – how would I query them? Well, I started by trying the following query on IdForTermSet and IdForTerm. This was a mistake.

There are more than 5000 items in the term set, so querying against IdForTermSet caused a query throttling exception. Instead, I queried for just the term ID:

And that worked, despite the over 5000 terms, and I could use that ListItem‘s integer ID to query my other list using the LookupId, and therefore using that list’s index.

What happens with a large TaxonomyHiddenList?