Another thing on my long list of ‘things to do’ was have a look at the RadEditor control. Well, one of the guys at the SUGUK meeting last week finally gave me an excuse – he told me that it would detect if MS Word Formatted text was being pasted into it. Now that would be cool; all our customers have problems with users pasting Word formatted text directly into MOSS. Hell, we even had this problem with MCMS – some users insisted on writing every in Word, and copying and pasting text across

So although I might be the last dev on earth to do so, I thought I’d take a look. And I was impressed. The Telerik RadEditor comes in two versions – the ‘Lite’ free (!) one, and a big brother paid for one. I decided to try the Lite one as free stuff is always an easy sell to customers.

[EDIT: it appears that I may have somehow gotten the full version – stripping of Word formatting is a ‘full version’ thing, apparently – as is the spellchecker that I turned on]

Installation was pretty easy – the only glitch was that the manual talks about adding an assembly reference to the top of your Page Layouts, and there is a later version of the assembly than that quoted in the manual.

You do have to edit your page layouts to use the RadEditor control – but it’s pretty simple:

Yup, just ASP. So what does it look like?

Much like the normal Content Editor, although with a decent vertical height. There are a few neat features though. First, I tried pasting Word formatted text in:

Cool, a warning. That alone is a great enhancement. So what does it look like if I say yes? 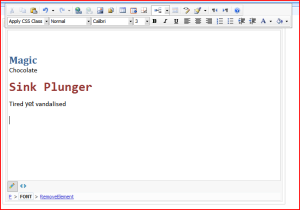 Well, yes, my funny formatting is still there. However, and you’ll have to trust me on this – the code behind the content is much tidier.

So, what of the styles I’ve pasted across? Well, the RadEditor control is able to do more sophisticated removal of styles.

Neat. The ‘All HTML Tags’ option is rather nuclear, but the other options would be useful in trying to ensure consistency. The Strip Word Formatting could help with the pages that already have that formatting in them! (There are always pages like that).

Next on the things that impressed me was handling of tables. There is a proper wizard for designing tables.

That’s a problem that a couple of customers have had – the ordinary content editor lets users create tables – but doesn’t let them set cell alignment, so the cells are all middle aligned. The table wizard is a great idea, it makes configuring up tables in the editor really possible.

Next up, the Image Manager feature:

It lets us browse over SharePoint Lists and Libraries – as you’d expect. What I didn’t expect was it to be able to generate thumbnails!

It’ll create a thumbnail, and save it back to the library the file you’d selected came from. Not entirely convinced about the resampling algorithm – the image looked a little blurred to me – but it works pretty well.

So, are we featured out yet? Not really. Next up – it comes as a web part too: 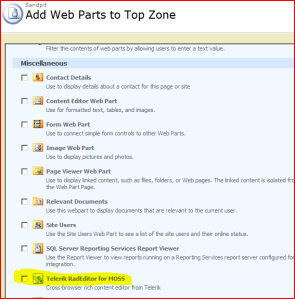 And gives you some features:

so that you can use the RadEditor in you List Forms (i.e. editing your list items). For example, here is an item in an Announcements List:

As you can see, RadEditor goodness. That is pretty smart.

What else? Spellchecking, anyone? (I shouldn’t be able to turn this on, but I could – not sure why!)

All very cool. I’ll be recommending it to others. And that’s not all of the features, either! You can get a feature comparison here.

So, conclusions? Well, I can see why Microsoft asked Telerik to build a RadEditor for SharePoint – it’s far better than the out-of-box one. SharePoint’s own control… works. But it lacks polish, and has annoying niggles – for example, vertical table cell alignment, and allowing users to insert Word formatted HTML. The Telerik solution is what everyone hoped for from the built in control. I’m looking forward to using it!

One thought on “Finally Looked at RadEditor…”