This web part is a little strange; indeed, I’m not sure how to describe it. As I understand it, basically it’s a web part to generate a data-view web part, and add it to the page. Sound strange? Well, it is a little bit. Let’s have a look: 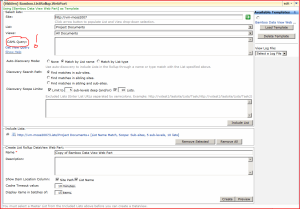 As you can see, this is a big web part on page. It’s user interface is much more complicated than the Lightning Conductor. I couldn’t help but notice that to do filtering by metadata column values appears to require writing CAML – which really is a bit much for many users.

This web part then generates an output Dataview Web Part:

(In that example, it’s only aggregating from one list – ‘cos I forgot that gave my lists different names, and then told the view to roll-up by list name).

In short: Probably the most powerful and feature rich of the web parts, but not as easy to use as some of the others. Really, more of a developer tool than a user tool.

So, on to the conclusions…